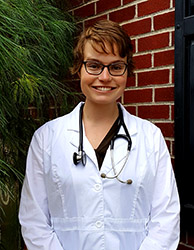 Originally from northwest Montana, near Glacier National Park and Flathead Lake, Dr. Ariana Hayes grew up with many cats, dogs, and horses in her life. From an early age, she had an interest in veterinary medicine and science that continued to develop throughout her high school years. Dr. Hayes received a BS in Chemistry at The University of Montana in 2011. During her undergraduate schooling, she also worked in a local veterinary hospital which led her to pursue training at Washington State University College of Veterinary Medicine. Her veterinary studies emphasized companion animal medicine and surgery. Dr. Hayes graduated with her DVM in 2015.

Outside of work, Dr. Hayes enjoys spending time with her husband Bob who is a research scientist in the pharmaceutical industry. They share common interests of hiking, skiing, camping, and playing musical instruments. They also have two cats, Mook and Jacob. After spending the last two years working in the northern tier of Pennsylvania, Dr. Hayes is excited to join the team at North Penn Animal Hospital.

We are closed every Wednesday from 2-3 pm for a staff meeting. Should you have an emergency, please call our office.