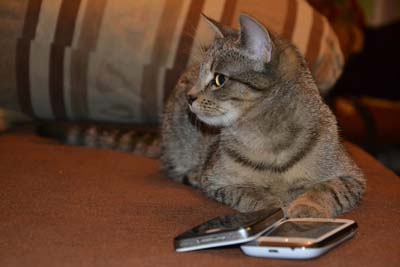 Social media is a great way to connect with people and businesses, but it can also give you your pet fix! While animals having their own social accounts is nothing new, some pets have built up quite the following.

Shelli Walsh shared this infographic back in December 2012 and all of the accounts are still going strong. So if you’re looking for a distraction, have a little fun checking them out, plus a few we’ve added that have joined since then.

@MySadCat – The Bear belongs to Tom Cox, who tweets pictures of him looking sad with his guess as to why his cat is sad. Tweets begin with “My cat is sad because…” and then hilarity ensues. @MySadCat joined Twitter in January 2013 and has 236,000 followers.

@EmergencyKittens – This one is not a single cat, but rather a continuous stream of adorable cat pictures to get you through your day. This account began in December 2012 but has amassed a following of over 593,000 tweeps.

Marnie the Dog – with over 270,800 fans, this Shih Tzu is famous for her “derpy” look. She’s also on Instagram and Twitter if you can’t get enough pictures of her rubbing elbows with celebrities and wearing sweaters.

Minnie & Max the Pugs – These two Pugs have almost 850,000 Facebook fans and have made appearances on Ellen, The Tonight Show, and more. They use their fame to raise awareness for Pug rescue.