Immunization: The Core of Your Pet’s Preventive Healthcare

Home » News » Immunization: The Core of Your Pet’s Preventive Healthcare 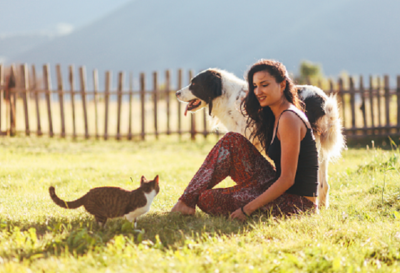 Immunizations, or vaccines, are one of the greatest medical discoveries – they fundamentally changed modern medicine. Starting with the smallpox vaccine in the 18th century, vaccines continue to be developed for both human and animal health. The rabies vaccine, developed by Louis Pasteur, was first given to dogs in 1881 and then in 1885 to a child who had been infected with rabies—the child is the first known survivor of a rabies infection. Vaccines play a crucial role in preventive medicine to protect both people and animals from the risk of serious and sometimes fatal diseases.

A vaccine is a preparation that helps the body’s immune system get ready to fight disease-causing organisms. If the immune system is exposed to an unfamiliar microbe (bacteria or virus) as part of a vaccine, it will produce antibodies that will be ready to fight if it is exposed to the same microbe again. Antibodies are what help the body fight infection and protect it from getting the same illness again. Vaccinations are intended to reduce the severity of the illness or prevent the disease entirely by creating immunity.

Vaccines have improved the lives of dogs and cats around the world and have played an important role in public safety. While veterinary vaccination programs have not yet eliminated diseases (as is the case for humans with smallpox), vaccines for rabies, distemper, parvovirus, feline leukemia, and panleukopenia have greatly reduced the incidence of their respective diseases.

The greatest achievement with the vaccination of companion animals is the reduction of canine distemper—a contagious, serious, and often fatal disease of dogs—in areas where vaccines are used. Another great achievement is the virtual elimination of rabies in people caused by dogs (dog-mediated) in Canada, the United States, Western Europe, Japan, and 28 of the 35 Latin American countries. This has been attributed to mandatory rabies vaccination of dogs in these areas.  Rabies is, however, still widespread in many developing countries around the world. Even though rabies is preventable, it kills about 59,000 people each year. Ninety-nine percent of these deaths are caused by dog bites and nearly half of the victims are children. United Against Rabies, a four-way partnership between the World Health Organization, the Food and Agriculture Organization, the World Organization for Animal Health, and the Global Alliance for Rabies Control, has set a goal to eliminate dog-mediated rabies by the year 2030.

The COVID-19 lockdowns disrupted many pets’ vaccine schedules as clinics had to close or operate on an emergency-only basis. Now that we are getting back to ‘normal’, you should contact your veterinary clinic to find out if your pet is behind on any immunizations and, if so, schedule an appointment to get back on track.