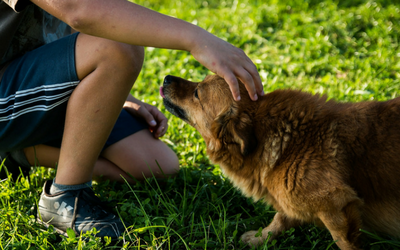 April 9-15th marks Dog Bite Prevention Week. Millions of friendly dogs, and yet millions of people get bitten by dogs each year. Why? Dogs love attention and love being petted – most of the time – but there are many situations when a dog should be left alone. Any dog can bite, even friendly ones that have never bitten anyone before. Dogs are animals with protective instincts, and may bite if they feel threatened.

About half of all dog bites happen to children. Teaching young children how to respond (and what not to do) when a dog approaches – with or without an owner present – is important so they have these skills when you are not nearby. By learning about dog behavior, and how our own behavior can affect a dog’s response to a situation, many dog bites can be completely avoided.

2)      Guarding a resource such as food, their resting place, a toy, or their owner

How can I prevent a dog bite?

When a dog is with its owner, you must always ask before approaching the dog, even if the dog is familiar to you. The dog might not be feeling well and petting her may not be an option. If the owner says it is okay to the pet the dog, try calling her to come to you, rather than you going to the dog. Pet her on her side, not over her head.

If a dog is sleeping or resting don’t pet him. If he is startled, he may bite as a defensive response. When a dog is lying still and you want to pet him, call him to you rather than going to him.

If a dog is eating, NEVER try petting her. She may see this petting as a threat to her food resource and bite in response.

If a dog is playing with a toy, again she may see someone petting her as a threat, and bite in order to guard and defend her toy.

If a dog is growling or barking, do not pet him. The dog is already feeling threatened and trying to pet him could translate into a dog bite.

Never reach through a fence to pet a dog. The dog is protecting his territory and may instinctively react to you as if you are a threat.

When a dog goes into his crate or a hiding spot, he wants to be left alone. Teach children that when a dog is in his crate, he is off limits.

Not all dogs like hugs and kisses. Hugs and kisses are a way for humans show affection, but dogs may feel threatened by this behavior. Teach children that hugging and trying to kiss a dog is not the way to show love for the dog.

Often times, cyclists and joggers will meet dogs on trails or in parks. When a jogger runs past a dog, or a cyclist rides by, the dog will naturally want to give chase. Unless the owner has trained the dog to ignore such encounters, expect that running or cycling past a dog will cause excitement or aggression. Try slowing down and walk past the dog, or give a wide berth around the dog.

What should I do if a dog is not with his owner?

If a dog is not with his owner, NEVER pet it. The best response when an owner is not present is to cross your arms, turn your face away, and do not stare at the dog. The dog will likely lose interest and leave. Do not run. Do not yell or scream. Do not wave your arms about. The dog may see these actions as an attempt to play or as aggression, causing the dog to get excited, bark, and take chase.

Some tips for dog owners to reduce the chance that their dog will bite:

Socialize your puppy by introducing him to a variety of situations. Introduce your puppy to other dogs and people of all ages, especially young children.

Learn your dog’s body language. Make sure that he wants to interact with people.  If he backs away, take that cue from him and remove him from the situation.

Don’t ever put your dog in a situation where teasing could happen or where she will feel threatened. If anyone is teasing her, remove her immediately from the situation.

Use a leash on trails and sidewalks. Train your pet to “leave it” when encountering joggers and cyclists.

Never leave your baby or young child alone with a dog. Young children are often bitten on the face by a family dog because they are right at the dog’s level. Parents need to watch all the time to make sure that the child does not climb on or hug the dog.

Know your dog and be gentle with him. A dog that learns to trust humans early on is less likely to react in situations that he doesn’t like.