Do Dogs’ Personalities Change With Age? 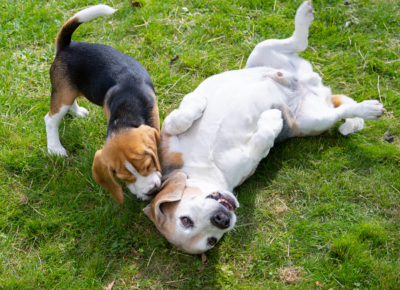 Curious puppies! When you think of a puppy, you may think of a cute little pup playing with the newly discovered doorstop or barking at himself in the mirror. Or a curious pup peaking around the corner, ready to pounce on unsuspecting toes as they approach. Or maybe a tiny soft snout is rooting into your hand when it smells something more interesting than the toy he was chewing on. You only need to scroll social media for a few minutes to laugh at the seemingly endless videos of curious puppies getting into mischief!

Of course, our pets don’t act entirely the same in their senior years as they do when they are youngsters. But when does their personality begin to change? When do puppies begin to lose their curiosity? Or do they lose it altogether?

Recent research shows that a dog’s personality does indeed change as he ages, especially his attraction to novel experiences, the desire to explore, and the urge to run around (think puppy zoomies – they certainly don’t happen as often with senior dogs as they do with puppies).

However, as with humans, the study noted that a dog’s personality is stable and impressionable, meaning that if your dog was super active and curious as a puppy, he would remain active and curious as he ages. But suppose your dog was more of a lap dog, even as a puppy, and couldn’t be bothered with those silly bouncy puppy games. In that case, he’ll be even less interested in novel experiences and more interested in hanging out on your lap as he ages!

In simple terms, while every dog will become less active and less curious as he ages, it is relevant to their history. You may have noticed this yourself—have you ever met a 12-year-old dog that you could have sworn was a puppy? You can bet that this senior dog was even more curious and active when he was young.

This study’s findings also showed that dogs maintained their desire to socialize and tolerate frustration as they aged. A dog’s attentiveness and problem-solving ability improved up to about six years of age and remained stable as the dog grew older.

As one might expect, the researchers found that their curiosity about novel objects and situations starts to decline when dogs reach about three years of age. That’s the age when most dogs begin to “mellow” out. If you have a puppy that is so active, you wonder when (or if) it will ever slow down; fear not, given some time, your furry friend will become less active soon enough!

However, it is important to note that personality and behavior are very different. If your older dog’s personality seems to change because he is exhibiting different behavior (e.g., growling more often, spending more time alone, doesn’t enjoy his favorite toys or games), it could be a sign that he’s feeling unwell or is experiencing chronic pain. If you notice changes in your dog’s behavior, it’s a good idea to have your veterinarian examine him to look for the cause and help him feel like his old self again.