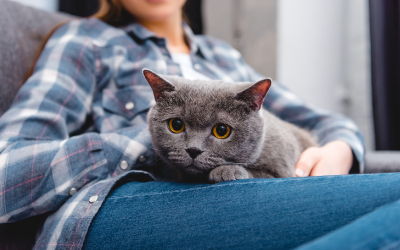 There are cat lovers all over the world! In both the United States and Australia, about 30% of households have a cat. Similarly, about 38% of households in Canada and 25% in the UK have a cat. Just how many cats are there in the world? Good question! Including feral (free-roaming) cats, estimates range from 220 million to 660 million! In the US and Canada alone, there are about 83 million cats.

Cats became domesticated about 12,000 years ago, and in a very unique way. As humans moved from a hunter-gatherer to agricultural lifestyle, cats took advantage and moved in to hunt rodents in granaries. Cats essentially chose to live with humans! Early farmers recognized the important role that cats played in vermin management. It was a win-win situation – cats got free food and people got free pest control!

Ancient Egyptians likely saw this benefit too, and the cat became a respected animal in Egyptian culture. It is well documented that cats were part of Egyptian family life, pampered, and adorned with jewels. Cats were so valued that the penalty for killing a cat in ancient Egypt was death.

Today, cats are generally well-regarded and often considered members of our families. They are a joy in our lives and offer many health benefits – aside from vermin control!

Studies have shown that cat owners have better psychological health than those without pets. Adults and children alike report feeling happier and more positive feelings if a cat is part of the family.

Cats are stress reducers. Cat owners generally have a lower resting heart rate and blood pressure than people without cats. Cat can also reduce the risk of various heart diseases, including stroke.

Can they help with allergies? Yes! Exposure to cats early in life can help reduce allergies, including allergies to ragweed, dust mites, and grass.

Even cat videos are good for you! After watching cat videos, people report having fewer negative emotions (such as annoyance, sadness, and anxiety) and more positive emotions. Cat videos can even leave you feeling more energetic! With over 2 million videos posted on YouTube, there is no shortage of content to make you feel better.

Aside from the obvious love your cat gives you, there are a lot of benefits to owning a cat. Whether you are a cat owner, or just like watching cat videos, December is the month to celebrate our feline friends. Give your cat an extra snuggle or belly rub – or take in a few cat videos on your lunch break!