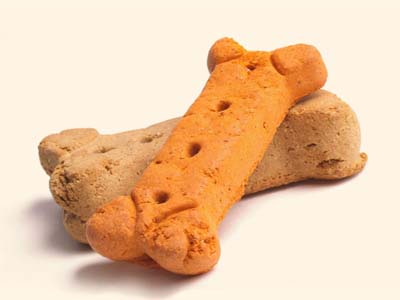 The term “dog’s bread” has been around since Roman times, but it usually referred to a bad bran bread, and the term became synonymous with treating people poorly.

Dog biscuits more closely resembling what we have now first began to surface in the early 1800s in England, with vegetables, grain, and bran being baked together. These were sold not only as a treat, but with the promise to help with coat and skin health.

The first mass-produced dog biscuit was made by an American named James Spratt. His “Meat Fibrine Dog Cake” was manufactured in London beginning around 1860 out of blended wheat meal, vegetables, beetroot, and meat. The factory could produce 50,000 biscuits per hour.

These “Dog Cakes” were initially sold to English country gentlemen for their sporting dogs. Spratt’s Meat Fibrine Dog Cakes came to America in 1881, and were quite a luxury item at the time, being marketed at dog shows, and on the cover of the first journal of the American Kennel Club in 1889. Spratt’s Patent, Ltd. supplied army dogs with hundreds of millions of the biscuits during WWI.

In 1907, F.H. Bennett gave Spratt’s a run for their money by making the first bone-shaped dog biscuit, known as the Milk Bone. Milk Bone was purchased by Nabisco in 1931, and Spratt’s was acquired by General Mills in the 1950s.

Now there are more commercial dog biscuits than you could shake a stick at, in all sorts of flavors, shapes and sizes!