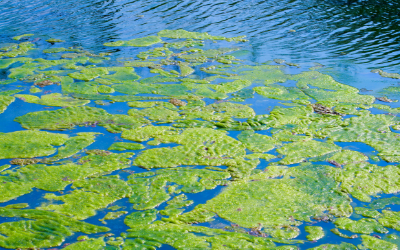 Blue-green algae, also called cyanobacteria, are bacteria that get their energy through photosynthesis, like plants. As their name implies, they often are a greenish-blue color, but can be blue, green, yellow, reddish-purple, or brown. They grow in lakes, ponds, and slow-moving streams. Blue-green algae is often referred to as “pond scum.”

When the conditions are just right – warm temperatures, light winds, and high nutrient run-off – blue-green algae can grow very quickly and form a large mass called a “bloom.” Because they float, they can be blown into thick mats near the shore making the bloom easily accessible to anyone venturing into the waters, including dogs going in for a splash! But be aware! These blooms can contain poisonous toxins, and even the smallest exposure – a few mouthfuls of water – can cause serious illness, or even death. Not all blue-green algae produce toxins, but since there’s no way to tell which blooms may be toxic, assume that any algal bloom is toxic.

Microcystins can cause liver damage and failure. Signs of liver damage include vomiting, diarrhea, fresh blood in the stool (or black, tarry stool), weakness, pale mucous membranes (gums, eyelids), jaundice (yellowing of the skin and whites of the eyes), seizures, disorientation, coma and shock. Without immediate emergency medical treatment, the liver damage can progress to liver failure and death.

Anatoxins can affect the nervous system. Signs of toxicity include muscle tremors, rigidity, and paralysis. Respiratory muscle paralysis causes breathing difficulties and a blue discoloration of the skin and mucous membranes (gums, eyelids). Death can result within minutes to a few hours with respiratory paralysis. Treatment must be administered immediately to prevent death.

Western Lake Erie has experienced a large bloom this summer. In just two weeks in early August, the bloom doubled in size from 300 square miles to just over 620 square miles, impacting many beaches in both the United States and Canada. The National Oceanic and Atmospheric Administration is urging people and dogs to stay away from these areas. Heavy rains in the spring and early summer provided the nutrient runoff, and with the calm winds in July, created the perfect conditions for a large algal bloom, which is expected to continue well into the fall.

In addition to the Lake Erie bloom, other regions in North America, including North Carolina, New York State, Wisconsin, and Alberta have reported significant blue-green algae blooms. Sadly, several dogs have died this summer, suspected or confirmed to be linked to these blooms. If a warning is posted at a public beach or the beach is closed, heed the warning and stay away from the water.

Importantly, if you see or suspect blue-green algae:

If your dog does come into contact with water contaminated by blue-green algae, rinse him well with clean water. Make sure he does not lick himself – simply licking the coat or paws is enough to have fatal consequences. After rinsing, immediately seek veterinary care at an emergency clinic.

Enjoy the last fleeting days of summer, aware of the dangers of blue-green algae. Watch for public warning signs and check the water before letting your dog go near or in it. It’s not too late to share a few more fun splashes!